I know this is not one of those serious, adult dramas, but the National Treasure films are a kind of guilty pleasure; a welcome interlude from the more emotional, sophisticated pictures. I am fascinated with American history, having explored Washington, D.C. more than a dozen times. When I’m there I find myself completely enthralled in the vibe. Not the political vibe, but the vision and courage exhibited by the Founding Fathers as they launched this nation.

In National Treasure: Book of Secrets, sequel to National Treasure, we have the familiar puzzle solvers, Ben Gates (Nicholas Cage), his father Patrick (Jon Voight), the computer nerd Riley Poole (Justin Bartha) and of course the easy-on-the-eyes Abigail Chase (Diane Kruger). They are joined by a new character, Ben’s mother, Emily Appleton played with spunk by Helen Mirren.This time it’s personal as they are out to clear the name of great grandfather Thomas Gates, whose loyalty to his country has been besmirched by Jeb Wilkinson (Ed Harris). Jeb contends that great grandfather Thomas was in fact the master mind behind President Lincoln’s assassination, and has an entry from John Wilkes Booth’s diary to prove it.

The hunt for clues begins and Ben and Patrick are at their usual brilliance. But along the way they are stumped by a new set of glyphs discovered within the Twin Resolute Desks, one belonging to the Queen of England and the other residing in the Oval Office. Ben gets into Buckingham Palace and steals one of the glyphs and then leverages Abigail’s charms to get access to the Oval Office so he can search for its mate in the President’s desk (which is missing). Enter mother/ex-wife Emily. She is able to read the now dead glyph language and sets them on the correct course to clear the family name, and uncover one of the seven lost cities of gold, Cibola. Wouldn’t be a National Treasure picture without the treasure.

Riley adds value beyond his computer hacking skills, informing the gang about the Book of Secrets. A book that has been handed down from president to president, with only the chief executive knowing the content or where it’s kept. Inside that book are critical clues.Ben successfully kidnaps the President and talks him into divulging the location of the book (Library of Congress). One thing you can always count on with these movies is a look inside big government buildings you only see from the outside. Whether actual locations or sets, it’s done very well. But in what is now an overused franchise tool, coincidence after convenient coincidence takes place. Ben is always in the right place at the right time and can immediately identify and piece together the most obscure clue. 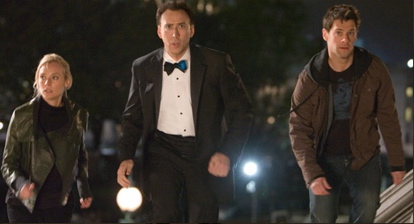 In the final scenes, they battle the evil Jeb Wilkinson as they ascend Mt. Rushmore and then follow paths cut in it’s rocks back down into the mountain in search of Cibola.

I don’t think I will be spoiling anything by telling you they were successful, and that the door is wide open for yet another sequel. Even though it’s light entertainment, it is fun to watch. But it could be so much more interesting and stimulating to the mind if things didn’t always so easily fall into place. Visit the official National Treasure movie site here.