It’s not that easy to find a theatrical release suitable for a 3 year old. But it was Good Friday, we weren’t working or schooling, and determined to go to the show. So we navigated our way through a spring snowstorm to see Hollywood’s latest attempt to bring a Dr. Seuss story to the big screen, Horton Hears a Who.

Jim Carrey plays Horton. The friendly, sensitive elephant who hears whos coming from Who-ville. Mr. Carey plays the range from sweet to driven with classic delivery and timing. You see, Who-ville is a speck perched atop a purple clover, floating through Horton’s jungle. The Mayor of Who-ville, played in fine style by Steve Carell, is more of a figurehead. He has no real power in his office, but aspires to attain the mayoral greatness achieved by his male lineage. Through a break in the plumbing, the Mayor learns of Horton and both quickly become believers in each other, and each other’s worlds.

The movie cuts back and forth between Horton trying to convince his jungle mates that an entire world exists on a clover, and the Mayor trying to warn all of Who-ville that their world is teetering on the verge of extinction. Horton spends his time avoiding Kangaroo, played deliciously by Carol Burnett. She is an overprotective, alpha mom who feels Horton is a bad influence on the children. Where has Carol Burnett been and why can’t we see more of her? She gets a bald eagle, apparently from Transylvania, Vlad Vlad-I Koff (Will Arnett), to intervene and put an end to all this nonsense. Vlad is my favorite character in the film. Spontaneous and hilarious, but doesn’t have the sharpest talons in the flock. The filmmakers do a relatively good job of getting across the “everyone is important, no matter their size” theme. 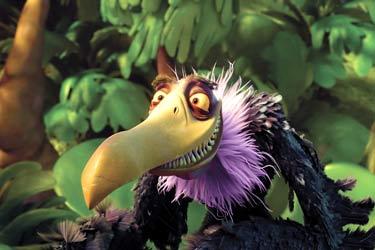 Pic has strong visual effects and sound design. These things are so good now, that you frequently forget you are watching animation. Every character and scene is rich in detail, a feast for the eyes. Exceptional tech work all around.

Like most of us, Dr. Seuss helped me learn to read, but I have never found any of the screen versions to live up to the material; and that includes this one. The film interpretations are not captivating or energizing in the same way the books are, because Theodor Geisel’s wonderful cadence is lost. The strength of the books lies in the brevity of the text and the minimal artistic presentation. His genius was to remove the unnecessary and present the essential. The details aren’t necessary. The films are the opposite, crammed with details, burdened with over editing and extremely loud.

Memo to Hollywood: Let Seuss remain on the printed page. The books are the movies.

I suspect the moguls realize that to some degree, but the fun of making them and the financial attraction is too great to resist. My son seemed to enjoy it, except when the Wickershams try to stuff Horton into a cage.

You won’t be missing much by waiting for the DVD. But check out the Horton official web site. Some really great stuff there.