Heeeee’s Baaaaack. Indiana Jones and the Kingdom of the Crystal Skull is more of a marketing event than a picture. It’s as much about the filmmakers, Spielberg, Lucas and Ford, as it is the film. But then again those are the guys that made it.

Going in I tried to temper my expectations, having been bombarded by a sea of hype over the last month and a half. The first Indy picture was such a thrill, and the trilogy worked well as a nice package to build out the characters and create the Jones myth. So why bring it back? Obviously the box office potential was way too tempting for Paramount. Turns out that Indy Jones is finding a new audience among kids. They are absolutely enthralled by idea and are now old enough to experience the first three films on DVD. This has created a powerful promotional on ramp to the Crystal Skull installment.

Picture opens with Jones having been kidnapped by the KGB and taken to a military warehouse in the southwest U.S. The Russian bad guys are led by Agent Irina Spallko (Cate Blanchett), the ultimate poster child of the elysian vision of Lenin’s Soviet Socialist Republic. They force Jones to locate a storage crate containing the remains of an alien life form, most likely from one of those UFO crashes. Apparently there have been crashes in the Fatherland as well, and Agent Spallko is hard at work piecing together clues on her own. 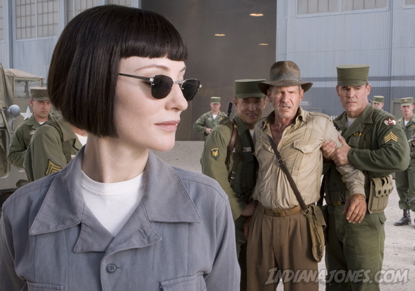 After a fun opening the film slows down a bit as Jones meets Mutt Williams (Shia LaBeouf) who gives him a cyptic note from Professor Oxley (John Hurt) by way of Mutt’s mother. Both are missing somewhere in a South American jungle. As expected the note is a riddle written in a dead language that only Jones can decode. This installment relies more on plot convenience than the other three, but we quickly forgive as the movie shifts into high gear.

Classic Spielberg technique is on full display. The Indy Jones films have a wonderfully simplistic quality about them. Part comic book, part science fiction, part historical drama. It’s very difficult to combine all these elements into one picture. This is Spielberg’s gift. He just knows how to compose the frame, create the visual language, inject humor, then distill it down in the editing process. Although he is consciously working to build a new audience, he is careful to retain many of the subtle touches that keeps his original audience connected. Like the image of a prop plane flying over vintage maps, while a red line shows us the flight plan.

Everyone ends up in the same place, trying to find the same thing. Ms. Blanchett, her face and hair chiseled out of soviet stone, is positively diabolical, and will stop at nothing to learn the paranormal secrets that will help her ensure the world will become one big Soviet Union. It took me a while to warm up to Mr. Ford’s performance. But he is in amazing shape for his age and by the fourth reel I was fully in the Indy Jones mode of the past. John Hurt’s on screen time is spent mostly as a raving lunatic, trapped in the mental grasp of things beyond human knowledge. Mr. LaBeouf is a ’50s rebellious figure that knows more about what he doesn’t want from life. This casting choice was critical for Lucas and Spielberg, as they have chosen Ford’s successor.

Along the way there are a number of formidable obstacles that must be overcome. Jungles, mean red ants, nasty grave guards, waterfalls and then in the end the transformation of matter to the “space between the spaces.” Needless to say the bad guys get what’s coming to them and the heros get away. Indy rediscovers his love for Mary (Karen Allen) and learns something unexpected about Mutt.

Kingdom of the Crystal Skull is classic Indy Jones. Exciting, entertaining and fun for all. This might be the last time we see Mr. Ford in the leading role, but I’m sure Paramount will work hard at keeping this franchise alive for as long as possible, with or without him. Recommended for families. If you are super serious arty type, skip it.

Visit the official Indiana Jones web site. Paramount has done a really nice job integrating the other three films into the experience. You can see photos from all four films. Really interesting to see the evolution of the actors and visuals.