A snowy, spring day in Chicago seems like a perfect time to catch a flick. Have been waiting anxiously for the Dreamworks Animation production of Monsters vs. Aliens since I read about it over a year ago. Maybe it was the fact that my expectations were too high, but I was disappointed with the experience. This review is of the standard version, not the 3D presentation.

Turns out military guys have been keeping secrets from the general public (go figure). When they find an earth monster, mutant creatures actually, they hide them away so no one gets scared. This has been going on for 50 years. The latest addition to this collection—not much of a collection, only 4 monsters alive in the program—is Ginormica/Susan (Reese Witherspoon). She was hit by a meteor on the morning of her wedding day and immediately grew to over 50 stories tall. She is taken to that undisclosed military location where she meets the other Monsters. They are B.O.B. (Seth Rogan), Dr. Cockroach, Ph.D. (Hugh Laurie), The Missing Link (Will Arnett) and Insectasaurus (no voice talent). By the way, there used to be at least one other Monster, The Invisible Man, but apparently he has passed on.

Soon Aliens are drawn to earth to retrieve their life and power-giving element that was encased in the meteor. After successfully extracting it from Susan, they decide to take over earth through a clone army. After all traditional military weapons fail (yes again they fail) the Monsters are released to help destroy the Aliens. There is a hysterical scene where President Hathaway (Stephen Colbert) approaches the robot scout sent ahead by the Alien and taps out songs on a Yamaha keyboard. First the tones from Close Encounters, then some get down funk and complete with some bad moves. Little did we know that the President was on to something, as dance and music is the basis for the Alien ship’s power grid.

Monsters vs. Aliens has stunning animation, superb color, cool effects and clean sound, all topped off by some wonderful speech performances by the actors. For example, take a close look at Susan’s hair. Has to be the best hair in any movie, ever. My biggest complaint is it took forever to get to the action! The story line is nothing exciting, no twists and a completely predictable ending. But there is plenty of humor to go around and it’s spread evenly across all the Monsters, I found myself laughing out loud throughout the movie. If it didn’t have the humor it would have been borderline painful for me. 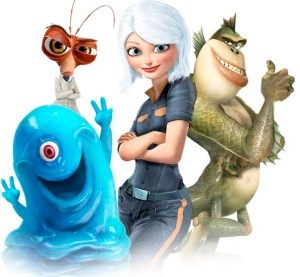 My favorite character has to be General W.R. Monger (Kiefer Sutherland). He’s the keeper of the Monsters and the holding area, and the Dr. Strangelove in the war room, which is an exact copy from Kubrick’s classic film. Sutherland is over the top with his raspy voice and gallant stunts. It’s his soft spot for the Monsters that has kept meddling scientists from tinkering with these finds. The general suggest the idea of unleashing the Monsters on the Aliens. Like Strangelove, Monger’s ideas seem outlandish and not feasible, but they are nevertheless, genius in a twisted diabolical way.

I purposely delayed the writing of this post to allow the film to sink in a bit more, in hopes it would grow on me. It did a bit. Enough to interest me in going back to see it in 3D in the future. The Monsters vs. Aliens official web site is awesome. Full of icons, wallpaper, sceensavers (PC only? are you kidding me? Really?), even coloring pages. But my prediction is that the ancillary marketing and items will not be over popular to the kids. In short, you pays your money and you takes your chances. You’re on your own.