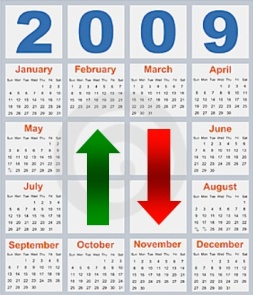 The end of a year is typically a time to look back in reflection. To take stock in what you accomplished and ponder that vast amount of goings on you’ve had in your life during those 365 days. There are lots of clues buried in all those minutes, hours and days. Lessons learned should be noted and if you dodged a bullet, try not to be in the firing line next time.

All years are full of events, some good and some more challenging; this one was no exception. I don’t know about you, but the last ten years flew by and I’m having a very difficult time labeling it as neatly as in decades past. I was tempted to do a post about the entire ten years but that would take too long. Instead I thought I’d share my personal highlights of 2009. So without further delay, here’s an abbreviated inventory as the December sun sets on the first decade of the 21st Century.

The Inauguration of Barrack Obama – Put aside the fact that this Presidential election vanquished a large section of the race wall (more to go) for a moment. This victory was about the American people rejecting fear and greed and embracing something more lasting,  more closely aligned with the intent of our Founding Fathers & Mothers. The official transfer of power signals hope, aspiration and the the opportunity to breathe life back into the precious dream that has always been the promise of this incredible country.

Economic Downturn Hits Home – Like millions of American families, ours was impacted by the excesses of a small group of people putting material rewards (their own) ahead of all else. My wife was laid off on the last day of January. It can happen to anyone regardless of their experience. Here is a woman with a Harvard MBA and years of success in complex public and private companies. Amazing how things can can come to the brink so quickly.

The Collapse of General Motors – I grew up with GM. My dad would only buy them, one of my uncles sold them, a cousin worked in the Oldsmobile plant in Lansing, Michigan, and two other uncles were mechanics for them. When they nicked their fingers they bled GM motor oil and had bodies by Fisher. My mother’s financial advisor said to her in 2003 as he recommended she invest in GM stock, “GM is not going out business.” I called him on that one. GM lost me in 1993 to the Japanese car makers and I’m a much happier car owner for it. It’s a shame, but not surprising that GM couldn’t transition on their own.

Mom Turns 90 – My mother is amazing; yours probably is too. Because of her I don’t have a racial bone in my body, like to work hard and am sensitive to other’s needs (well at least I think so). 2009 marked the beginning of her 9th decade in this lifetime and she is still going strong. She even occasionally jets around the country to visit family and friends and is game to try new technologies. I cherish every day I can speak with her or see her. If we live to 90, and many of us will, we should wish we are in as good a shape as my mom.

The Daily Show with Jon Stewart – Jon is the watchdog for all the crap and misdirection FOX Network pulls. He does it so we don’t have to and no one else could do it better. Thanks for that Jon. And for making me laugh four times a week, minus all those vacation weeks of course. We will be able to watch him in HD in 2010. Oh, one small thing Mr. Stewart. You might want to sharpen those interviewing skills a wee bit so we can learn more about your guests. Just sayin’.

Golf Game Re-Invented – I bought new new clubs and played more rounds in 2009 than I have in the last 15 years. Slowed down my swing and sharpened my putting. Gained more confidence with each round and shot a 79 in September. Now that Tiger is off the tour, is there a chance…? Ah, no.

A Two Week Vacation – For the first time in many years I unplugged from the grid for two consecutive weeks. It was beach, family, friends and golf. Fantastic weather all along the way. Want to do more of that.

Kindergarten – No not me, but I think I could handle it. My youngest son entered the public school system in August. It’s a milestone for kids and parents alike. Riding the bus, more structure and making new friends in preparation for the next 16 + years. Or as Connor refers to them; the number grades. He’s adapting very well, but hey Miss Newman, easy on the homework.

The Simpsons – One of my all time favorite shows had a very strong start to the 2009 season. Amazed at how they can keep up that smart writing so consistently. Favorite quote of the season so far. Character one, “Why do you need a pick axe, you’re in Marketing?” Moe, “If you were in Marketing then you’d know.”

Acquired a New Original Painting – This is one of the most exciting things I can do, but I’m not a multi-millionaire, so this kind of event is few and far between. 2009 brought me an original Huntley Baldwin for my wedding anniversary. It has found a permanent home in our dining room against a rich green wall.

Getting Back to Even – No this is not a review of the latest #1 bestseller by that chucklehead Jim Cramer. After an 8 month job search that included nearly 25 interviews, my wife accepted an exciting opportunity with United Airlines. We are all much happier as well as more sensitive to the plight of millions of others who are not as fortunate. Now we can get back to that 529.

Social Media Emerges – It’s been on the lips of so many this year. Social Media is beginning to take shape in the business world, but there are still some problems. It’s so broad that no one can really boil down the business benefits into C-level sound bites with clear attribution. Social Media will lead to something, eventually, and I am doing my best to champion it inside my firm. But it still has a ways to go before it can stand next to other strategies executives use to achieve revenue and profit goals. Firms that build successful social networks inside their own companies will have the best chance at turning this phenomenon into a respected practice and money maker.

Avatar – James Cameron is a polarizing figure no doubt about it. You may love him or hate him but it matters not, for in the end he delivers wonder. Avatar is a wildly creative work that transcends technology and signals to the industry that it’s time for 3D to be added to the language of the American cinema. The ideas go deeper than CGI and the story explores several levels. If you haven’t seen it, go as soon as you can.

Health Care Bill Passage – I understand that change is difficult, but not one Republican Senator voted for the Health Care Reform Bill. Amazing to me that the health of the American people is not priority enough for the GOP to find a way to work toward a mutual agreement. I guess it’s just more interesting for them to talk about taxes and guns. More work to be done on health care for sure, but this is a great start. Ted would be glowing.

2009 is now a closed book, but a careful observer can use what went on to inform the future. To make better choices and therefore have better outcomes in one’s life. I wish you a happy, healthy and prosperous 2010.