It has been said that finance is the art of passing money from person to person until it vanishes. That seems a bit harsh. But looking back over the events of the last two years, one is tempted to think this might actually be true. A third certainty taking it’s place along side the other two; death and taxes.

There have been some interesting documentaries made about financial meltdowns; The Smartest Guys in the Room detailing the Enron crisis comes to mind. But Hollywood did not move quickly to explore the nearly cataclysmic events of the fall of 2008 when the economic system teetered on the edge of collapse. Eventually 20th Century Fox called Oliver Stone and asked him if he would be interested in making a sequel to his 1987 film, Wall Street. I’m so glad they did. The result is sparkling. 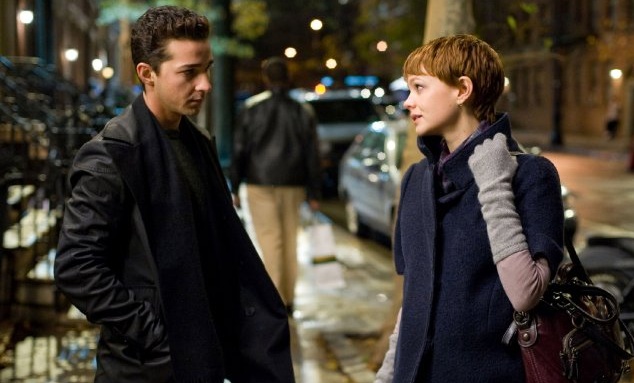 Wall Street: Money Never Sleeps is unexpectedly fun. When a director decides to make a sequel of his own film he has access to a vast amount of material from the first picture. Characters, story, dialogue and of course the zeitgeist of the original moment. The challenge facing filmmakers of sequels is to carefully select what to incorporate. To make intelligent choices. I believe this is Mr. Stone’s first redux of one of his works. Some believe that doing a sequel is selling out. “Just for the money.” To those I simply recite the following, The Godfather and The Godfather Part II. Enough said.

There’s just enough of the past folded into Money Never Sleeps to remind us of what it was like in the ’80’s. It also takes an open eyes look at a financial ecosystem that found itself starring directly into the abyss. Mr. Stone teases out the nuances from the original script and carefully embeds them into the hearts and minds of the characters in new one. Some things look familiar, some are new. But what is most impressive is how he packs this picture with symbolism, spins it up and then back down, coming to rest on a seemingly happy ending that has an uncomfortable premonitory feeling.

Picture opens with Gordon Gekko (Michael Douglas of course) being released from prison with a bag of useless personal items in one hand and one of those brick mobile phones in the other. He waits outside the prison for someone to escort him back into the silver lining he left behind. No one is there. In prison Gordon wrote a book and begins his new life lecturing about the evils of greed and how during the eight years of his incarceration it has accelerated and gone global, and no one can stop the inevitable. Is this guy Mayan?

An up and coming Wall Street trader named Jake Moore (Shia LaBeouf) attends one of Gordon’s lectures and catches up with him on the steps of the lecture hall. Jake is engaged to Gekko’s estranged daughter Winnie (Carey Mulligan), which wins him 10 minutes with the master (former master). There’s a deal struck. “I’ll give you a photo of Winnie when she was young and you get me back on her good side.” Old times, Good times. 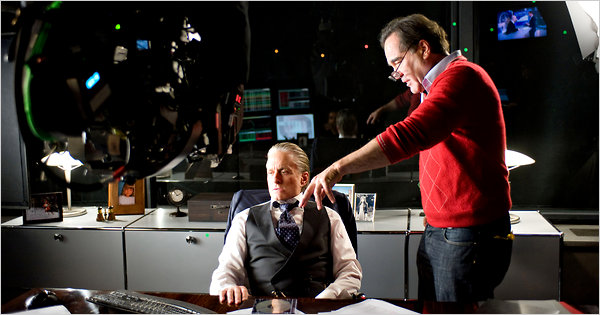 Jake has been taken under the wing of Louis Zabel (Frank Langella) long time investment titan (read: Lehman Brothers). Zabel gives Jake a bonus check of $1.4MM for his loyal service to the firm. Jake looks on Zabel as his mentor. We all know what happens next. Zabel goes down like a house of cards in what seems like hours. Other firms, one in particular, bets heavily against it. The point of no return has been crossed.

The film is a feast for the ears and eyes. Stone shows us stunning visuals of Manhattan at it’s best. Large, gliding vistas bathed in warm light. All the buildings seem as if they have just been sandblasted. We never glimpse the seedy side. When you have money you never have to. He uses the cityscape as a one would a bar chart in a PowerPoint slide, superimposing the collapsing stock market atop the urban architecture. Money Never Sleeps is somewhat unconventional for a dramatic set piece by dabbling in documentary and experimental styles. The visuals are nicely complimented by the unique vocal stylings of David Byrne and the haunting music of Brian Eno.

The new Gekko in town is Bretton James (Josh Brolin). He is just as ruthless as Gordon, but times are more sophisticated now, so he is infinitely more dangerous. James recruits Jake (the Bud Fox of the day) to help them build out their energy portfolio. But Jake has a much stronger emotional pull in Winnie than Bud did with his father or Darien (Daryl Hannah). The story between the two lovers takes some expected turns to propel the story through a flurry of scenes that remind us that Gekko is still at large.

Jake has a pet project. A mad professor who is exploring new ways to generate energy and has a constant need for cash. Winnie is the anti-Wall Street person and works for a non-profit with a blog. Jake’s zeal to mend the relationship with Winnie and Gordon, and fund his project backfires. Instead it drives father and daughter further apart and seems to dash all hopes of saving his project. His actions do in fact fund Gordon’s come back. 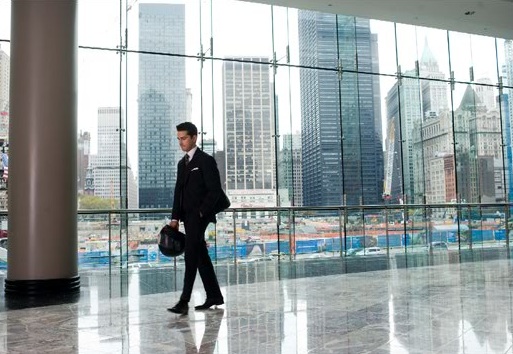 Stone sprinkles symbolism throughout the film. Bubbles being blown by children in Central Park rise to the clouds. Jake walks on marble floors of new buildings that ring the 9/11 site, with the twin tower footprints looming beyond the shimmering plate glass windows. The towers are one of the first images we see in the original Wall Street. The original pillars of the financial world are gone and new shocking memories of storied financial houses failing are about to be created, again.

Rodrigo Prieto’s cinematography is as rich as the characters he lights on the screen. The script by Allan Loeb, Stephen Schiff, Stanley Weiser and Stone takes us from the parties and fund raisers into the tough boardroom discussions, including that late Sunday night “too big to fail” meeting with the government at the head of the table. The acting performances are crisp. I highly recommend this picture. Vsit the very basic official web site here.