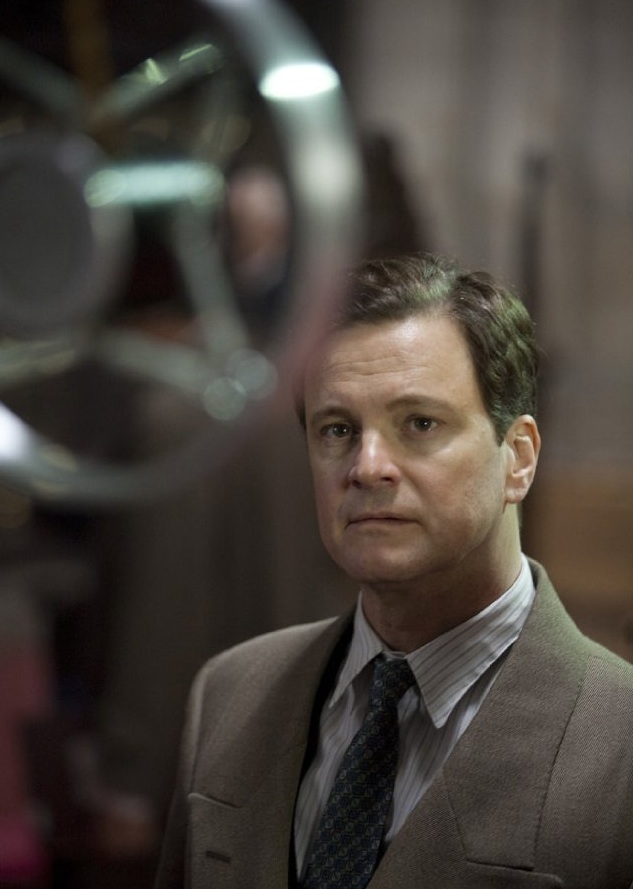 British drama is the ultimate tautological. They are forever and permanently linked. And despite the discomfort this has caused millions of Brits over the centuries, it has yielded some extremely good works of cinema for us to enjoy and examine. So all is not for naught.

This year we are given a rare gift in The King’s Speech, directed with immense skill by Tom Hooper, who is clearly the poster child for all that’s right about Masterpiece Theatre. It’s a true story of George VI who became an accidental King when his brother suddenly stepped down to be with the woman he loved. One small problem. George has a horrible stutter and even worse case of stage fright. Bad combination. The King’s wife, played solidly by Helena Bonham Carter, finds a speech therapist who learned his craft in a non-traditional manner by working with shell-shocked soldiers in an Australian war. That success allowed him to parlay his experience into a living in London. The screenplay (download  here) was penned by David Seidler. Mr. Seidler fills his pages with the crisis and spectacle of the royal family, but cleverly reveals it little by little through one-on-one conversations between this true blue blood and an Australian sans credentials. This device is carried off masterfully and molds our emotional responses throughout the full running time.

The team of Merchant and Ivory, Howard’s End, Remains of the Day and others had a lock on this genre. Their works were powerful and classic, and hold up to repeated viewings even today. But over time other films came along; Atonement and more recently The Queen. These looked more contemporary and in the case of The Queen, a current event. They were perfect portents for this picture. A fresh, new era of British cinema.

A beautifully constructed script is a work half realized. It’s the actors who must breathe in life, and this picture has two thespians putting on a clinic on how it’s done. Colin Firth as King George VI delivers a tortured portrayal of a man destined for the throne, but deathly afraid to speak. Mr. Firth plays the stutter to perfection, which causes him to be lost to the fact that everyone around him knows he can do it and is pulling for him to succeed. Geoffrey Rush is Lionel Logue, the Aussie who takes up the task to cure the King’s annoyance. Only an outsider could succeed at this. Being removed from the requirement to fawn over royalty is a key ingredient to allowing him to stick to his proven methods. When the King pulls rank on how things will go, Lionel counters with, “My castle, my rules.”

At first the King is put off by Lionel’s approach, but is eventually drawn back to him. Yes, certainly for the feeling that he can help, but more so to experience a unique friendship with an ordinary man who is not bound by blood and duty. This interplay makes the film.

Mr. Firth is incredible, but I very much appreciated Mr. Rush’s performance. Lionel Logue is a frustrated actor and likes to clown around; a court jester. He is playful and gets excited easy. His two boys are quite the opposite. They are focused and serious and give their dad permission to act like a kid from time to time. A very different family dynamic going on here. 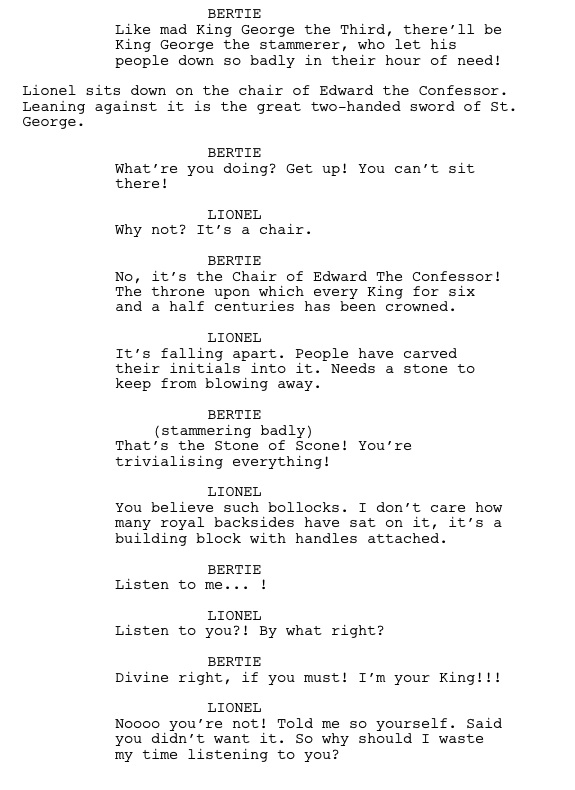 The soundtrack by Alexander Desplat has two or three themes that are arranged and weaved onto the visuals in an effective, but somewhat expected manner. It’s entirely appropriate and doesn’t overpower the performances. The music makers were able to obtain five of the original microphones used by King George V and VI to have present at the recordings. Much of the mixing utilized these microphones in a significant manner.

The cinematography, set design and costumes are all first rate, and if there was an academy award for best fog in a motion picture, this would win hands down.

Highly recommended and jolly good. The official web site can be found here, but like so many of these studio sites, it’s unremarkable.