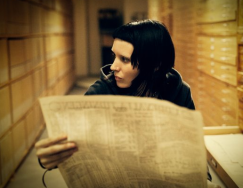 It took me until about the third reel to fully appreciate Rooney Mara’s acidic portrayal of Lisbeth Salander. Ms. Mara inhabits the character with fearsome angst, throwing herself into the darkness of Lisbeth’s world. Literally, she has peered into the precipice to manifest this character. I hope she comes back. Mara has mastered the physical appearance; the way she moves and her expressions (mostly empty). It is frequently difficult to watch, but impossible to avert your eyes. Over time Ms. Mara does allow new emotions to visit Lisbeth’s face but they are oh so brief. This is a very difficult part to play and she does it with courage and amazing stamina.

David Fincher’s The Girl with the Dragon Tattoo, based on Stieg Larsson’s widely read novel, is an emotional feast for the eyes and ears. The opening credits send a clear message that this is not going to be a passive experience for the filmgoer. Fincher is known for creating chilling credit sequences (Se7en), and this one is no exception. It features a cover of Led Zeppelin’s Immigrant Song which at first thought may seem an odd choice, but over time I’ve come to believe it to be an inspired choice. It’s a powerful, pounding song and it’s amped up even more under Trent Reznor and Atticus Ross’s arrangement. It does not match the style of the film, but perhaps Fincher was thinking about bridging across the trilogy of works by Larsson. It says, “Strap in and hold on.”

The picture is always calculating and at times brutal; just ike the Vanger family. It’s a stunning piece of cinema craftsmanship. Extremely high production values across the board. Acting is top rated and the characters move around in a labyrinth of mind and body games, all effectively captured by Fincher and his crew. I found it fascinating how Larsson blended modern crime detective technology methods, with procedures used four decades earlier, largely photographs, interviews and handwritten notes. Fincher took it one step further and pushed it to ultra high-tech, while keeping the film’s look basic; even organic. I will be interested to see how the Academy reacts next month when they vote for the Oscar nominations.

Stieg Larsson’s Millennium-trilogy leads with Dragon Tattoo. Larsson’s work is a tour-de-force of modern literature and right in Mr. Fincher’s wheelhouse. If you haven’t read this book go buy it now and read it. I don’t believe it makes any difference whether you read the book or see the film first. They work wonderfully as stand alone achievements and complement each other in a way that is rare, which is a testament to Steven Zaillian’s (Schindler’s List) adaptation for the screen. Of course he leaves out some things from the novel, but he stays true to the work. The book is a strict chronology of the events, by day or string of days. It transitions from one character to another within the same time series chapter. Mr. Zaillian and Mr. Fincher need to unpack the story a bit differently to keep the pace moving and tell the story for the medium. The way they have structured the shots and scenes gives the film it’s power.

Many of the audience members in the showing I attended had read the book and were chatting about it before and after the screening. People seemed more than satisfied with the adaptation.

As a ward of the state for most of her life, Lisbeth Salander never really had much of a chance to engage with normal society, but she may not have wanted to. She has a brilliant, near photographic mind and is a sorcerer of technology, not to mention well connected to the hacker underworld. Employed by a security firm as a researcher, her talents are reserved for more “delicate” projects. Her reports are impeccably curated and full of details that no one else could get at. 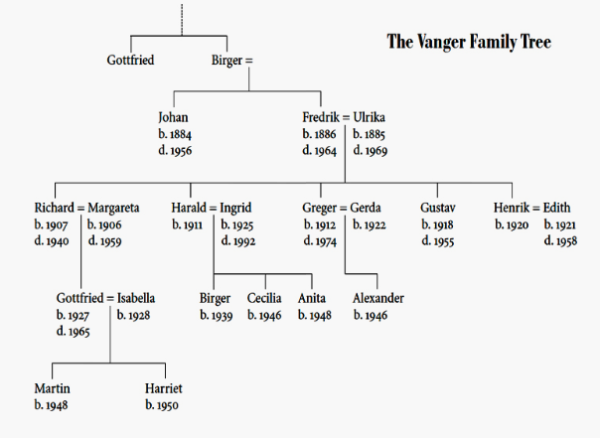 Fincher tries to help us keep track of the various members of the Vanger family, which is quite difficult as there so many of them spanning 60+ years. An aging Henrik Vanger (Christopher Plummer), the patriarch of the family, hires Mikael Blomkvist, (Daniel Craig) to try for one last time to solve the case of the sudden disappearance of Harriet Vanger at the age of 16. It was 40 years ago and mostly everyone has given up hope that she would ever be found. Harriet was the granddaughter of Henrik’s brother Richard. Vanger was heartbroken over the loss and is sure she was murdered by someone in the family.

Mr. Craig is solid in his portrayal of Mikael Blomkvist. Once confident, now reeling from a blow to his career. He is vulnerable but smart, and this explains how he is able to strike up a productive partnership with Lisbeth who assists him in trying to solve the case. Mr. Plummer is always a pleasure to watch as the aging head of a family that once dominated many aspects of commerce and industry in Sweden. You get the feeling that he is keeping a lot of skeletons in the closet. Oh, and of course secrets. Everyone is keeping secrets. The deep, dark variety. The remaining actors are well cast, engaging and suited to their characters. Particularly Stellan Skarsgård as Martin Vanger. Mr. Skarsgård is a native of Sweden, which may account for his ability to fit in not only with the geography but the culture of the country. His performance perfectly captures the darkness that can exist among some Vangers. Also Steven Berkoff who plays Henrik’s private attorney Dirch Frode, a protector, keeper and handler of many things Vanger.

This is less about the film than the book, but Lisbeth is a fascinating character and I wish I could know more about what was going on in her mind. It’s overshadowed by her appearance and inability to connect with society. Her small, slender stature causes her to be underestimated by most people, especially Bjurman (Yorick van Wageningen), Lizsbeth’s social worker. What happened to him was… Well, let’s just say it’s not a good idea to upset Ms. Salander without a strong Plan B.

The soundtrack is as somber as the story, with powerful punctuations during the film’s emotional scenes, and there are many of them. Reznor and Ross worked for nearly fourteen months on the score, and it adds to the picture’s drama and intensity. It converges seamlessly with the sound design on several occasions. Watch their music video release of the opening credits, a cover of Immigrant Song. Oh, one more thing about music in the picture. I nominate Dragon for the most creative use of an Enya song, ever!

The official Dragon web site is pretty standard fare for film sites. But do take a moment and explore the links in the upper right hand corner of the main site. These are sister sites and are much more interesting. Visit Mouth-Taped-Shut, which uses tumblr to promote the film and provide interesting graphics, What’s Hidden in the Snow and Comes Forth in the Thaw. A tip on the last one. Click the main page and then refresh the pop-up window several times. I also recommend you delve even deeper into the minds of the filmmakers. Click through How to Assemble a ‘Dragon‘ from the New York Times.

Images from the film courtesy of Sony Pictures. Vanger family tree from the novel, The Girl with the Dragon Tattoo.