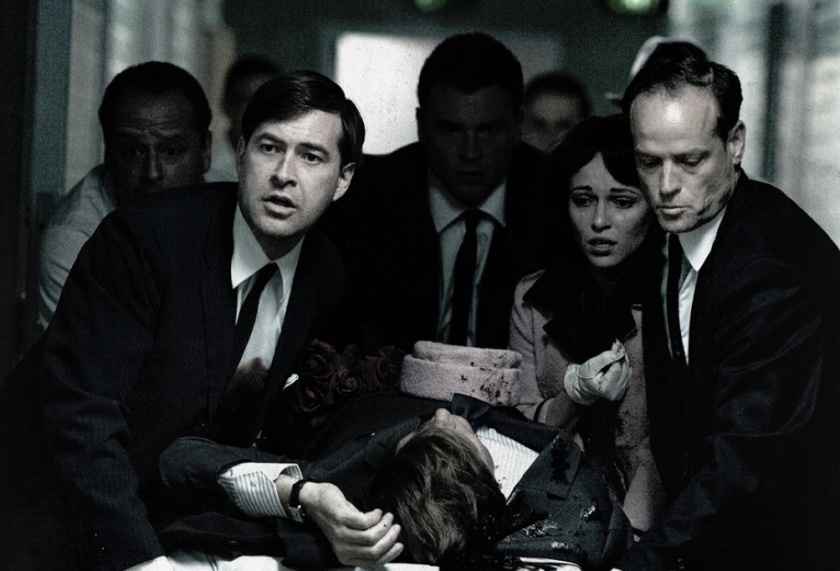 If you’ve studied the Kennedy assassination or even had a passing fascination with the events of that fateful day, you will instantly know what the subject matter of this film is by the title alone. Parkland refers to Parkland Memorial Hospital of Dallas. On November 22, 1963 the trauma team at this facility received a wounded President Kennedy, having been struck down by assassin’s bullets in Dealey Plaza minutes before. This month marks the 50th anniversary of the slaying of President Kennedy. Every year around this time books, magazines, TV specials and movies about Kennedy and the assassination spring up. Most of them are not worth our time and are produced to cash in on a seminal historic moment and a public yearning for closure. But Parkland feels different. It’s ernest and when the final images fade to black we feel we’ve seen a genuine attempt to help us understand just a little bit more.

Parkland is at its best in depicting the utter chaos experienced by the entire country, and world on that tragic day. No one was expecting this, and I mean no one. Kennedy was beloved and soared to celebrity, almost godlike status His demise was not even in anyone’s consideration set. He represented a turning point in modern American life.

Writer turned filmmaker Peter Landesman makes his directorial debut with Parkland. It’s an apt choice. Who better to take us through four of the most horrifying days in recent American history than a journalist. He is a stickler for details on every level. Landesman flawlessly directs the keen lens of cinematographer Barry Ackroyd (The Hurt Locker, Captain Phillips and United 93) to deliver a shrewd mix of documentary style camera movement skillfully contained inside the framework of a taught drama. The film is based on the book Four Days in November by Vincent Bugliosi who shares the screenplay authorship with Mr. Landesman. There is no plot, only story. It lacks structure because all structure collapsed during those days. In other words. They nailed it.

The final product with a few exceptions is fine craft. Parkland strives to take a new approach on a topic that has been researched and debated beyond any single event in human history. Most of us think we know most of what transpired, but this film is told in a visual manner that makes us feel as if we are seeing it with fresh eyes. As the title foreshadows, we spend a lot of time inside Parkland’s trauma rooms. Most of the time they are a complete and utter mess. Residents, nurses, doctors, and a confused group of government workers struggle to do their individual jobs, all working for the same goal. To change what they know inside of them is going to be the inevitable outcome. No one summons superhero powers, and a modern day President is lost.

The cast consists of a collection of accomplished actors; Billy Bob Thornton, Paul GIamatti, Marcia Gay Harden, alongside some very strong players. Mr. Thornton (below, third from left) plays Forrest Sorrels, a veteran of the Secret Service and the guy in charge of protecting Kennedy. He is tough and experienced but must now make the transition from being a protection officer for the ultimate chief executive to an investigator of his murder. Sorrels works independently after the assassination, finding Zapruder and striking a bargain to ensure the precious film becomes evidence. Sorrels obviously feels a great sense of responsibility but only shows us once. While viewing the freshly developed footage someone in the room turns to him and says, “You blew it.” Sorrels explodes. 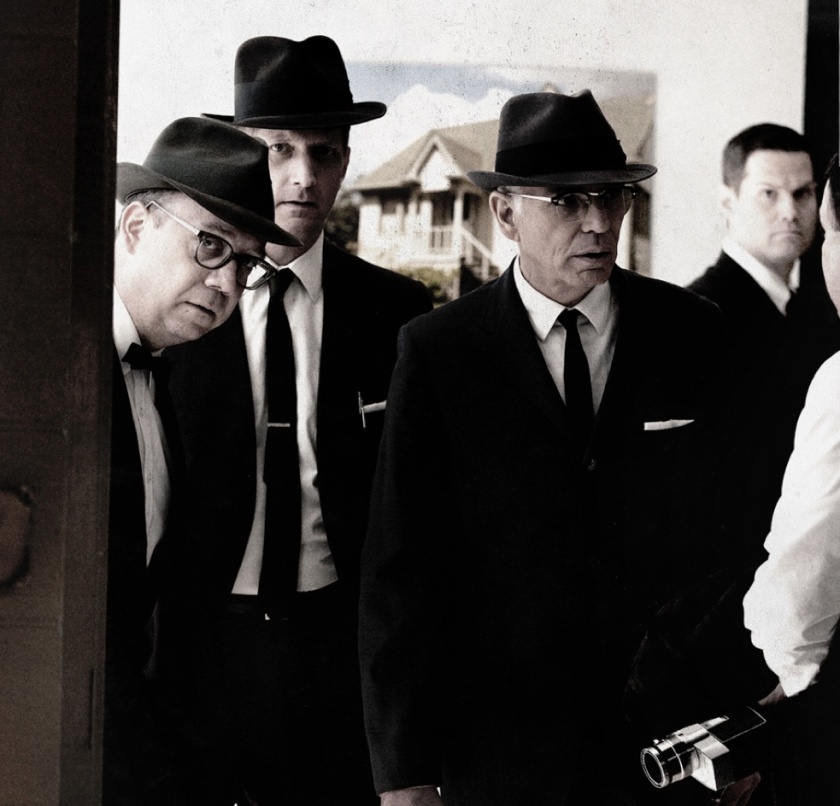 Mr. Giamatti (above, left) plays Abraham Zapruder, the Dallas businessman who was in the wrong place at the wrong time. Giamatti’s portrayal is deeply emotional and in some ways feels he is being used, but cannot put his finger on who or what. Zapruder was like any of the hundreds of citizens that day. There to get a glimpse of the President. The only difference was he had a camera and therefore instantly became the nation’s memory in this unthinkable shakespearean tragedy. He didn’t ask for that part, but he accepted it and reacted thoughtfully and respectfully.

Marcia Gay Harden (below right) is Doris Nelson, head trauma nurse in Parkland’s emergency room. She’s a rock and goes about her business strictly by the book. Despite this tough veneer she makes the emotional rounds of her colleagues, taking careful interest in their well being. Her presence in the trauma room while attending to a gravely wounded President Kennedy demonstrates her strength and devotion to her trade. When Oswald arrives after having been shot by Jack Ruby two days after Kennedy, she redirects the speeding gurney away from Trauma Room 1 and proclaims, “No. He is not living or dying in there.” Oswald dies in Trauma Room 5, the same room Jack Ruby passed away in four years later. Clearly Parkland has some deep karma. 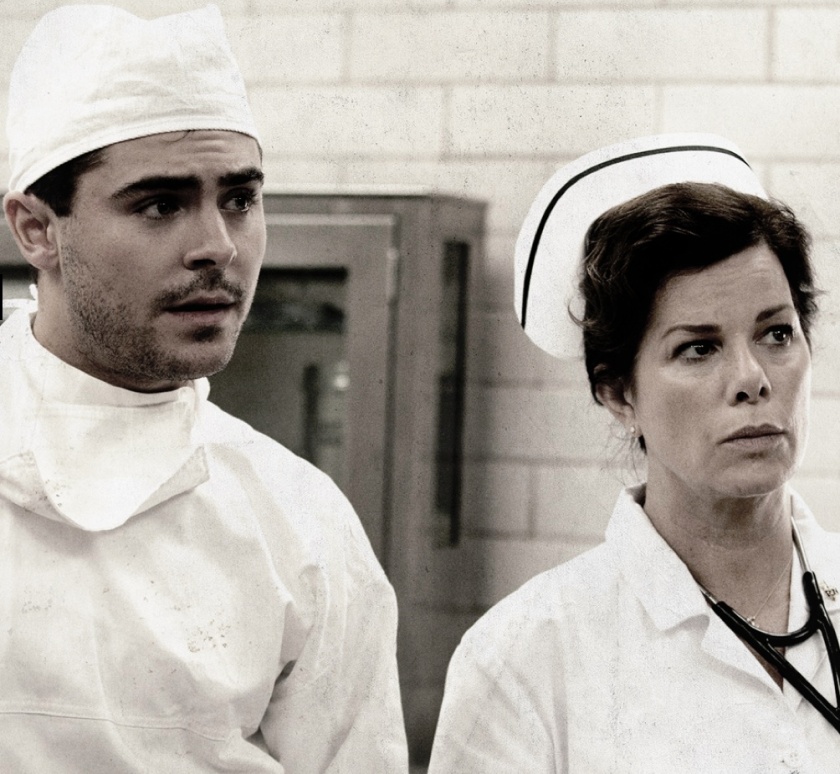 Zac Efron (above left) takes the part of Dr. Charles ‘Jim’ Carrico, who drew the short straw that day by being the resident in the room. Carrico starts off the morning carefree, but the gravity of the day causes him to mature in record time. Essentially he is the leader of the treatment team and after a brief “oh shit” moment, he springs into action. He becomes the collective conscience of the entire country by refusing to give up on a flat lined Presidential heart.

The filmmakers liberally sprinkle subtle visual clues that punctuate the enormous pressure everyone was under. The trauma room scenes are filmed in super realistic style and are gritty and gruesome. When the doctors and nurses work on Kennedy they aren’t wearing gowns or masks. In fact the doctors take off their pristine white coats. When Oswald is delivered, everyone is in full mask, head coverings and surgical scrubs. It’s a disguise, not wanting to be recognized trying to save Oswald’s life.

The Secret Service team suddenly find themselves having to care for a deceased President Kennedy. All of their training has been devoted to keeping him alive, not what to do once he’s dead. They don’t panic, but they become more human and less robotic. As they wait for the President’s body on the plane they suddenly realize they don’t know where to put the casket. Hastily they remove two rows of seats so they don’t have to fly the President back to Washington in the cargo hold with the baggage. In removing the casket from the hearse they fumble it and break off one of the handles. While struggling to carry the coffin up the metal gangway to Air Force One they must turn the coffin sideways to fit through the passage way. When the turn is obviously too tight, a saw is used to cut the bulkhead. They are all in shock but remain focused on “taking care” of the President. This more than any other aspect of the film illustrates just how surreal that day was.

The film pays particular attention to the Owsald family. Jeremy Strong gives it a go as Lee Harvey Oswald, but we will never be able to accept any other portrayal except Gary Oldman’s gripping channeling of the real Oswald in Oliver Stone’s JFK. Not in a million years. But Lee’s brother, Robert (James Badge Dale), turns in a fine performance. He has an unhinged mother and an obviously confused brother, but he is successful in balancing out the overwhelming insanity. The filmmakers give extra screen time to Oswald’s funeral that requires the enlistment of the press as pall bearers. Everyone else has turned their back.

All of the technical aspects of this film are strong. This is an independent film which typically gets shorter shrift in some areas. The producers, which includes Tom Hanks, were able to secure top talent in key skill sets that matter most. Ackroyd’s handheld camera as mentioned above, plays it raw and in the moment. Interiors are rich and focused, while outdoor scenes are tight but well layered. The era choices are solid and believably transport the viewer back fifty years. James Newton Howard’s score uses percussion, drum beats, pianos and a somber cadence that rightfully fits the mood.