At the close of day one my head was spinning. I managed to avoid all the trappings and temptations of Vegas and made it to my room at an early hour to review my notes and prepare for the next day. I chose to focus on two topics, Mobile payments and Crypto Currencies.

Apple Pay was announced not a month prior and so that dominated the conversation. How it would change the landscape of payments? Who will win? Probably the best way to start is to take a few moments to outline the four main attributes of Mobile payments. They are Near Field Communication, Secure Element, Host Card Emulation and Tokenization. 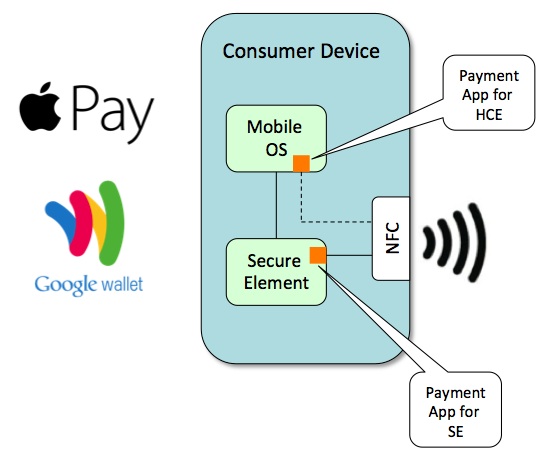 It has been reported that over 1 million cards were loaded into Apple Pay within 72 hours of the software upgrade being made available. This is more than all other providers combined, including Google Wallet which launched in 2011. This is a testament to the brand power of Apple who has over 800 million payment numbers in their iTunes system. Google has gotten a bump from Apple’s launch, seeing their wallet transactions increase by 50%.

The question of who will win leads to many more questions. How quickly will merchants install point of sale terminals that will accept NFC transactions? Will consumers feel comfortable loading their cards into their phone and using them at stores? As referenced in Part 1 of this Money series, recent and multiple merchant point of sale breaches have heightened everyone’s awareness that the payments ecosystem needs hardening. Consumers in particular are even more sensitized to this.

One more thing comes into play here. EMV, which stands for EuroPay, Master Card, Visa who collaborated on developing a standard that embeds a chip into a credit or debit card. This chip when inserted in an EMV enabled POS terminal. So another question to add to the above list is will merchants go all the way and deploy checkout hardware that will accept both NFC and EMV? The technology will improve security but is only good for physical story transactions. It won’t help with online commerce because the card is not present. It will also require some new consumer behavior. On an EMV transactions the card is not swiped, but is dipped into a terminal and needs to remain there until the customer signs on the screen and taps accept. Think back to the first ATM machines. You inserted your card and the machine held it until the transaction was completed. Now we either swipe or dip the card but it’s not left in the machine.

We are rapidly reaching the point where you can no longer look in your wallet or checkbook register and know how much money you have available to you. Technology, but increase of financial instruments and the ease of opening accounts has caused us to fragment our holdings across numerous places and spaces. If that wasn’t confusing enough, we now have crypto money being thrown in the mix.

I was aware of currencies such as Bitcoin but I didn’t really understand it well. When I saw the amount of time dedicated to it at Money I stopped into a number of sessions to learn. I walked out fascinated by the concept. If you stop someone on the street and ask them to explain Bitcoin you will likely get silence. Technically these currencies are a medium of exchange using cryptography to secure transactions and control how new units are created. There is no financial or banking system and it is not regulated (yet) in the U.S. The safety and integrity of the currency is maintained by members of the currency community known as miners. They use their own computers to validate and timestamp transactions. Why do we need these currencies? Well, obviously we don’t need them but the developers of feel that there is significant friction in the payments and currency system that leads to fees, surcharges, fraud, processing fees and waiting periods.

They site the lack of a global standard for money and nation state specific proprietary infrastructure as primary reasons crypto currencies are the next logical phase of money. Simple, fast exchange with no physical currency.

Although most financial institutions don’t recognize Bitcoin at this time, a number of online commerce sites are beginning to accept them at checkout. Certainly this is will not play into the average consumer at this time, but it is something to watch. Part 3 up next.

Read Part 1:  The Future of Currency and Payments