Robert Zemeckis has given us The Back to the Future trilogy, Forrest Gump, Contact, Cast Away and Flight. These are formidable works that strike a cultural nerve and straddle past, present and future. Indeed, Mr. Zemeckis has a way of transporting us across the space-time continuum with flair and style. He weaves humanism into his stories of adventure, sometimes to make a point, sometimes to simply entertain.

His latest film, The Walk, seems to be a clear labor of love. It’s based on Philippe Petit’s book To Reach the Clouds. Mr. Petit’s walk between the World Trade Center towers in 1974 stands as one of the most amazing human accomplishments ever, driven entirely by necessity, courage and the belief that art should play on a larger stage. His story becomes more important with each passing year we live in a post Tower world. This fact alone is more than a sufficient reason to bring the story back for a modern look.

Mr. Petit named his project le coup. it was by definition done undercover and on a tight budget. There was no investment put into capturing it beyond the amateur photographer accomplices who wore many hats that day, including the unlikely role of archer. Hence we have only grainy and mostly black and white archive images of his amazing feat. James Marsh’s 2008 Oscar winning feature documentary Man on Wire was the first time we got an up close look at Mr. Petit and his carefully planned caper. His documentary is the definitive chronology of what happened in New York on August 7, 1974, and I watch it every year on September 11th.

The Walk borrows heavily from documentary style that includes frequent cuts back to Philippe, played by Joseph Gordon-Levitt, perpetually perched on the torch of Lady Liberty. It leverages much of what was in Man on Wire, because that’s what’s written in To Reach the Clouds. It validates Mr. Marsh’s work allowing Mr. Zemeckis to focus his 3D, IMAX, big Hollywood budget on putting us on the high wire.

The early reels of the film seem to be from another story. We learn how Mr. Petit came to be drawn by the lure of the wire. There are sequences from his childhood that briefly include his parents and his early mentor, Papa Rudy, played by Ben Kingsley, who apparently can’t function without his hat or his dogs. He meets Annie (Charlotte Le Bon) in the Latin Quarter of Paris. Both are street performers in search of a dream. Mr. Petit has his dream clearly defined and is now on a journey to attract the people and fortune to carry it out. 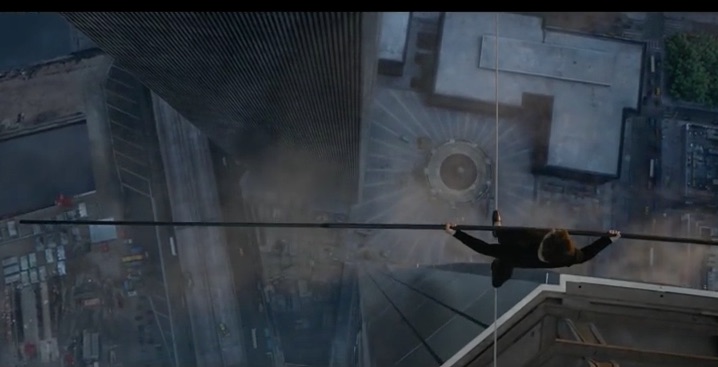 Mr. Gordon-Levitt has taken some flack for his accent in many reviews. When I look at his performance on the whole, he delivers on the things that matter. Heart, passion, drive and art. He captured Mr. Petit’s ability to envision and then achieve something most of us don’t even think about. The quality of his accent is of little importance in my mind.

Philippe and Annie make their way to New York and emerge from the subway to the staggering sight and enormity of the Towers. Momentarily discouraged Philippe is given and opening. A door is left ajar and he runs through it, climbing the stairs to the top of the Tower. Once there. Once he looks at the void between the twins, his will is cemented.

A band of characters is assembled to pull off the caper, but there ends up being just a couple who are committed enough to Philippe’s dream to see it through. On the day they decide to carry out the feat, they face numerous obstacles, all of which are somehow magically disappeared. There was a moment when the cable had been hung and Philippe was ready to make the walk, when a businessman emerged from below, surveyed the situation and simply walked back down without saying a word. Perhaps the Towers themselves somehow intervened, seemingly longing what was likely the only above ground physical connection each would have with the other.

The last forty minutes will make you squirm as the wire walker performs. In the documentary Man on Wire, we don’t see any footage of Philippe walking the wire. Only stills. Mr. Zemeckis gives us that gift in The Walk. We are there for every step on the wire hastily strung and secured. It’s worth seeing in IMAX 3D and if you were ever in the Towers, or gazed up or looked down from the observation deck, be prepared for what you will feel.

The technical aspects of the film are exceptional all around. Highly recommended and rated PG, so take your children and have that discussion. The official website is horrible. I’m so disappointed in how the studios uses their movie sites now.