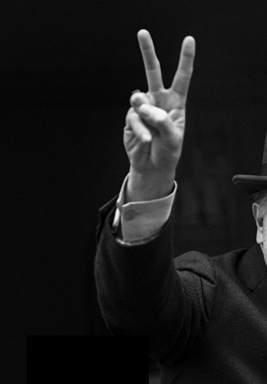 Oftentimes we hear of the larger than life figures of history through a fairly narrow window. Their stirring quotes and courage summed to make decisions, all the while carrying the weight of a country on their shoulders. Certainly if you read in depth biographies you get to see various sides, but the number of people who take the time to do that is quite small.

Whether intended or not and I have no idea if it was, Darkest Hour could be looked at as a comment on the political situation we find ourselves in across the globe. This film is about courage and leadership for an entire country. Not just a popular idea, or a subset of the population.

In Darkest Hour, director Joe Wright (Atonement) and writer Anthony McCarten (The Theory of Everything), significantly shorten the story horizon while putting their Churchill on the defensive in Parliament as well as himself. It takes place in a span of less than a month; from the time he becomes Prime Minister due to Neville Chamberlain’s (Ronald Pickup) ousting, through the exiting of the British solders stranded on the Dunkirk Beach.

They give us a seasoned politician who has been through the ringer, drinks constantly and smokes like a chimney. During the crisis moments he is hesitant, demanding and absolutely certain that he has figured out how to deal with Hitler. Despite knowing the outcome, the filmmakers manage to build suspense through great pacing and the urgency of saving 300,000 troops.

Gary Oldman is splendid in his portrayal which is given a huge push with a near perfect prosthetic body suit and superb facial make-up by Kazuhiro Tsuji. I have always admired Mr. Oldman’s skills which have been carefully honed over years and dozens of films. There’s the action Oldman; Romeo is Bleeding and Air Force One. He looks different from movie to movie, paying special attention to the physicality of who he is playing. His performance as Lee Harvey Oswald in JFK and Shelly Runyon in The Contender are two of my favorites. I can’t see anyone else ever playing Oswald again. His Runyon character was a warm-up to Churchill; cigar included.

Near the end Churchill must address Parliament to lay out his next steps and overall vision. He observes ordinary Londoners walking the street and entering the Underground. When his limousine stops he gets out and walks onto the Tube. He has warm exchanges with the working class going about their day. I don’t care if this actually took place, but this film made me want to believe it had. This grounds Churchill who had never been on a bus or a subway before. It also validates his thinking.

The film is shot almost entirely in a fog; either from all the smoking or the filmmakers foreshadowing the coming fog of war. Britain was unprepared for the German Blitzkrieg and no one was really sure Churchill was up to the task; him included. Once installed as Prime Minister by King George IV (Ben Mendelsohn) in a most informal manner, things get into high gear very quickly.

Early on we meet his new aide. A young woman who is thrown into the lion’s den of Churchill’s constant drinking and smoking and oh yes; his lack of manner. Elizabeth Layton apparently drew the short straw and despite a shaky start, gives it the still upper lip, much to Churchill’s advantage. Lily James (Baby Driver) plays the part with a straight spine and regal neck. She’s also a perfect typist. When Churchill does let his human slip show, it’s done more often with Layton than anyone else besides his wife Clemmie (Kristin Scott Thomas). Ms. Thomas shows up just at the right time to both support and advise her husband as well as provides some needed comic relief.

Viscount Halifax (Stephen Dillane) a prominent conservative and personal friend of the King was Foreign Secretary at the time and wanted to negotiate a peace deal with Germany. He viewed Churchill as a war hawk with no room in his head for dealmaking. As if there wasn’t enough friction in Churchill’s life, this one had the potential to derail many things. Mr. Dillane has one of the best lines in the film. After listening to Churchill’s first speech as PM he turns to Chamberlain and says, “He mobilized the English language and sent it into battle.” It had a double meaning. Indeed Britain would surely go to war and it sent a clear message to Hitler that the storied history of the kingdom would not lie down as Europe had done.

Much of the film was shot in the Churchill War Rooms, nicely recreated for the film. I went back and looked at the photos I took in those rooms on my last visit to London, and was impressed at how faithfully and how much attention to detail the set designers took. Small historical inaccuracy. Churchill didn’t use the War Rooms until late in 1940 because there were no air raids yet.

When the story ventured outside London we mostly see only overhead shots from the vantage point of Luftwaffe bombers pounding Europe below. There are also no live shots of German soldiers and Hitler is only seen once, on the cover of a newspaper and heard once in the War Rooms. Even the opening credits show the Nazi war machine in black and white stills. They hadn’t yet crossed the Channel and Britain was still untouched.

The only Golden Globe nomination for Darkest Hour went to Gary Oldman for Best Actor in a Drama. Mr. Oldman is the film and his performance is worthy of serious recognition. If Dunkirk hadn’t come out in 2017, this film might have faired better with audiences as well as in the upcoming awards season. If you want to see a veteran actor perform his craft beautifully and are keen on WWII history, you will have an enjoyable experience.