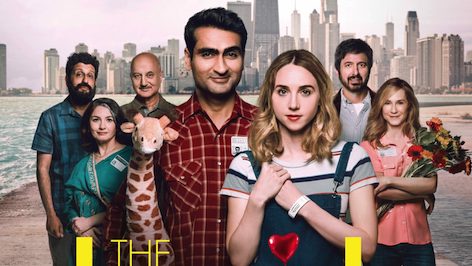 I really enjoyed The Big Sick. l think in large part for its ability to make me laugh even through a life or death circumstance. Michael Showalter directs this surprising gem written by married couple Emily V. Gordon and Kumail Nanjiani (HBO’s Silicon Valley). Its based, I’m assuming, on their real life exploits, but maybe not. No matter.

Kumail (played by Kumail) is a Pakistani man who is struggling to be a stand-up comic, performing regularly in a small club in Chicago. He has strayed off the culture reservation his parents and brother faithfully live. The connections he has built with other comics also have big dreams and this is how he keeps it together. During one of his sets he is heckled by a young graduate student, Emily (Zoe Kazan, Ruby Sparks, What If). Later that night he spots her in the bar and has a brief back and forth. Soon after they end up at his apartment. We sense an immediate but cautious mutual attraction that neither will admit to or cash in on for many days.

The early reels of the film focus on Kumail and how he circles the uneasy relationship with his mother who parades a constant stream of hand-picked Pakistani women before him each time he’s home for dinner. Kumail is not honest with himself or anyone else. When his parents remind him to pray, he retreats to their basement, but instead of praying, he practices his one man show. He is lost between two cultures, hasn’t picked a future and runs away from a past that was never his to begin with.

The relationship between Emily and Kumail begins to bloom. Both are guarded about their past, which is the catalyst for a stressful breakup, Emily falls seriously ill and her roommate phones Kumail insisting he go the hospital and report back. He does and is forced to make a decision that could determine Emily’s future.

Enter dad and mom. Terry (Ray Romano) and Beth (Holly Hunter). The picture shifts gears and reveals the universal message in the story that almost every character will face. Mr. Romano and Ms. Hunter have terrific chemistry and breeze through the film despite Emily’s dire condition. Kumail’s persistence to be present begins to resonate with them, cracking the door open on their true selves and what it has meant to their marriage and child. This unveiling hits Kumail particularly hard and that of course extends to his parents, especially his mother.

The writers cycle us through a lot of will she or won’t she? Will he or won’t he? Will they or won’t they? This technique often causes me to want to take a walk, but the filmmakers manage to pull off these swings with enough skill to keep me around. In the end I was glad I did.

Zoe Kazan, who played Emily (granddaughter of director Elia Kazan) is one to watch. Her character is in a coma for a good portion of the picture so she had to work hard to ensure we wouldn’t forget what she stands for. Ms. Kazan nails it.

Production values are just a couple of notches above a a solid Television pilot but we don’t really care. The Big Sick was snubbed by the Hollywood Foreign Press (no Golden Globe nominations), but it could sneak in with an Oscar nom. It’s happened before.

Listen to The Big Sick soundtrack by Michael Andrews on Spotify.

Enjoy, but stream it.