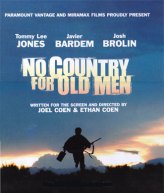 Joel and Ethan Coen have a talent for hitting the audience right between the eyes (sorry). What an amazing body of work. Blood Simple, Miller’s Crossing, The Man Who Wasn’t There, O Brother, Where Art Though?, Barton Fink, The Big Lebowski, Fargo, and now No Country for Old Men. Yes I’ve left some out, but these are the important works. I ponder long and hard over how best to characterize their films, but I keep changing my mind. My latest word paring description is dramatic surrealism. Their elements are visceral and easily recognized. Serious but laced with humor. Almost always violent, but often the dialog is as sweet as pie. Usually the situation is a little uncomfortable for the characters and the observer, but you can’t possibly look away, no matter what you might imagine will happen. And as you stand back and look at the whole, something is very much askew.

Watching No Country for Old Men frequently evoked Fargo for me. Opening shots of a bleak, barren landscape, not fit for man nor beast. This is not a world of cell phones or blogs, but one of instinct and stop-at-nothing drive. The locations contain only what is essential to the story, no extras, no filler, just pure story. Llewelyn Moss (Josh Brolin) is a Vietnam vet and a retired welder living in a run down trailer park in nowhere Texas. He is married to Carla Jean Moss (Kelly MacDonald). All we know about her is she works at Wal-Mart and loves Llewelyn. While he is out hunting one day (still stalking the enemy), he comes across the aftermath of a drug deal gone terribly wrong. Carnage everywhere. One of the pick-up trucks is still loaded with product, but there is no money in sight. He follows a trail of blood–the entire movie is a trail of blood–and comes across the last man standing who has $2MM in a sample case. Looks remarkably like the sample case that held the money in Fargo. Llewelyn of course takes the money, thinking that he can actually get away with it. He obviously doesn’t know about one of the basics of life which states, “Just because you find something out there there in the universe doesn’t make it yours.”

Needless to say the finance guys want their cash back. And so their man to retrieve it is Anton Chigurh, played with chilling steadiness by Javier Bardem. They could not have made a better choice. His weapon, or “right tool” is a gas propelled cattle stun/kill gun (no bullets). His voice is deep and dark like the rest of his persona.

Then there is the county sheriff, Ed Tom Bell (Tommy Lee Jones) who is approaching retirement and has presided over this corner of Texas since he was 25. Although age-wise, he still wonders why people do what they do, dealing with it through the use of humor and storytelling. He genuinely wants to solve this case so he remains engaged, but he knows the players in this game are out of his league, so he stays on the fringes.

The story is primarily a violent game of chase between Llewelyn and Anton. Llewelyn leverages his military experience to stay one step ahead, but it takes him too long to discover that the money has been lo jacked with a transponder. There is much these men have in common and we see them doing the same things in isolation, such as treating their own wounds. But only once do they actually speak to each other in a chilling phone conversation (rotary dial models only), where each one ups the ante and challenge. Both make promises you know they will either keep or die trying.I was completely riveted to the screen by the performances, drawn in by the dialog, and in awe of how they use the camera and lighting. The editing was invisible, while Carter Burwell’s music (noticed over the end credits) is more environmental than musical, causing the viewer to reflect on character’s choices and state of mind. So many things are linked together, but left unexplained; a Coen brothers hallmark. Perhaps Cormac McCarthy’s novel, on which this film is based, does a better job of connecting Sheriff Bell’s personal and family dynamics to the rest of the story. But here it is not a useful detour. I did however find it interesting, especially when the Sheriff recounts his dreams and speaks of the proud professional linage that has defined the men in his family. In the end he states that he is “over matched,” an observation that allows him to actually reach retirement. Others in his family didn’t fare as well.

Want to see this one again because I still have some unanswered questions in my mind. And as always, can’t wait till the next Coen brothers installment. In the meantime, I’m still looking for the money Carl Showalter buried in the snow.

Link to the official movie site for No Country for Old Men. Embedded within the end credits is a statement that the production is 100% carbon neutral. Yet another detail the Coen brothers have attended to.