Oliver Stone’s latest film is W., a psychoanalytic vista of the life and first term of George W. Bush. Mr. Stone tones down both his filmic style and voice on this one. It’s not at all what you might expect considering the subject matter and Mr. Stone’s track record. W. is actually quite tame and in many ways even handed. You certainly recognize his familiar signature camera choices and fast cutting, but he has slowed it down, giving the audience a chance to let things sink in along the way. It may have something to do with the fact that he’s telling a story of a sitting President and not someone who has since passed away. Or perhaps he just feels sorry for Mr. Bush.

George W. Bush is played brilliantly by Josh Brolin. He has nailed it all around. Clearly the voice. But when we see him swagger through the corridors of the White House after a disastrous performance at a press conference, you actually see the President and not the actor. An obviously challenging role Mr. Brolin executes it with skill, spirit and sensitivity.

This is a story about the Bush family, not just George. Poppy Bush’s (James Cromwell) presence is felt throughout, even when he ‘s not on screen. Jeb Bush was destined to be the next political player in the family, not W., but God stepped in, saved W. and made a brother swap that seems to have been just as upsetting to Poppy as it has been to the rest of the world. Oddly enough we are left with the notion that W. was more like Barbara Bush than Poppy. Who knew? I didn’t particularly enjoy seeing that much of the elder Bush, but the script left Mr. Stone little choice.

There are some excellent actors in the film, but no one is a stand out or scene stealer. Richard Dreyfuss plays Vice President Dick Cheney, Scott Glenn is Donald Rumsfeld, and Thandie Newton is a thin Condoleezza Rice, both physically and in character development. This crew is downright scary, but no one more so than Karl Rove (Toby Jones). Genius boy is always checking his Blackberry and constantly totes a three ring binder, probably full of algorithms that crack the code on how to pull another one over on the American people. Everyone kind of floats in the background, plotting their own personal agenda as an ominous, dark undercurrent of “party first” permeates through everyone’s psyche. Everyone that is except Colin Powell (Jeffrey Wright), who is uncomfortable with how things are being decided. We know how that ended. President Bush is decisive as we have come to know but relied heavily on his advisers. It’s a natural instinct, after all it was these guys and Poppy who set him up in 1600 Pennsylvania Ave NW. Too bad they got so many things wrong.

Out of nowhere, Mr. Stone cuts in some brutal footage of the Iraq war. It kind of feels like a cheap shot, as it is such a stark departure from the clinical, political settings we had been watching. It’s a chilling reminder that unleashing the “shock and awe” of war has equally “shock and awe” consequences. 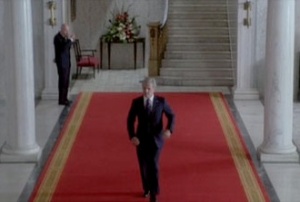 Mr. Stone gives us lots to ponder. Periodically he brings us back to center field in the Texas Rangers baseball stadium. A franchise once owned by W. This was George’s field of dreams. A place where he could come and clear his mind. The White House lawn was not as kind. In the opening shot he’s in a baseball uniform sprinting toward the wall and snares a fly ball. In the closing scene he’s back in center field, but this time his uniform is the standard Presidential business suit. He’s tracking a fly ball once again and approaches the warning track. But the ball never finishes its arc. He gazes toward the sky in confusion and dismay. Wondering what happened.

The film was shot in 46 days so it could be released prior to the election. But there is really nothing new here, and certainly nothing at all controversial. It won’t have any impact on the outcome of the election.

Mr. Stone has always provided footnotes and historical references to back up his films. No where was that more important than in JFK, as the Book of the Film contained not only the screenplay, but countless cross references to actual events. That was before the web. The W. official web site is not that very inspiring or fun, but the W. official film guide site is fascinating. It provides descriptions of 83 of the film’s scenes accompanied by articles, reference works and other source material. It’s worth a look. As far as the film goes, you can definitely wait to rent this on DVD in a few months.