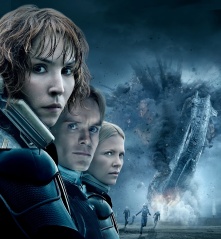 There’s no question that Ridley Scott likes strong women in his films. Thelma and Louise, G. I. Jane and of course Ripley in Alien. Mr. Scott moves through the rich tapestry of the female mind and places them, physically, at the epicenter of danger and discovery. I have always loved Ripley’s spunk, but I gotta tell you Dr. Elizabeth Shaw in Prometheus could outlast her in any situation. Noomi Rapace portrays Shaw brilliantly. A face of wonder, a mind of a scientist and a woman with, as was put in the film, “extradorinary survival skills.” Ms. Rapace played Lisbeth Salandar in the Sweedish Dragon Girl films, so I guess that makes her ready for anything. She doesn’t disappoint.

H.R. Giger’s imagination is given yet another life in Prometheus. This time however, his illustrations come alive, not as hideous monsters, but as hideous <human> beings. Prometheus is the story of a space expedition in search of answers to the biggest questions mankind could ask. That is not what makes this film thought provoking, as we are always looking for answers. This work hints that we will never know all the secrets because they are not knowable in a single time or space. Nor are humans smart enough to divine them alone. If we go looking and are serious about finding them, we must be prepared to go all the way. But that usually leads to premature death and that doesn’t aid the objective.

This film completely changes the strategy.

It’s the year 2093 and the crew of the Prometheus lands on a moon orbiting a planet far from earth. Ancient drawings found on earth generations and continents apart point to this planet. Two scientists, Dr. Shaw and Dr. Charlie Holloway (Logan Marshall-Green) piece together the puzzle and convince Peter Weyland (Guy Pearce), the aging CEO of Weyland Industries to fund the project. One trillion dollars later we have the space craft Prometheus. Weyland is a businessman but is facing mortality and is also curious about the drawings. He leverages Shaw to provide the single-minded belief system he doesn’t possess. There is of course a replicant on board ship. David is played with scary precision by Michael Fassbender, who is just as useful and mischievous as Ash was in Alien. Scott rounds out the crew in familiar ragtag fashion with experts and skeptics and nincompoops.

Overseeing the project for Weyland is Meredith Vickers, played with a gigantic chip on her shoulder by Charlize Theron. Vickers is sleek and cold, wears cool uniforms and knows a thing or two about hairstyles. One gets the sense that she’s there under duress. She has her own personal lifeboat with all the necessary creature comforts, just in case. Or in her mind, when the inevitable occurs.

The team discovers what they are looking for immediately upon landing and it’s not good. People die and Dr. Shaw becomes impregnated although she is biologically unable to have children. The gestation period for this creature is more like nine hours instead of nine months. Before we get the burst, Shaw is able to drag herself to a robotic surgery table and programs it to perform  a caesarean while she is awake. The machine extracts the alien and staples her up, no worse of the wear. Take that Ripley.

Before the crew was awakened from sleep state, David has put those two and a half years to good use studying all living and dead languages to their roots. This allows him to decipher the markings on the rounded pyramid walls and open secret rooms that reveal the darkest mysteries of the “engineers.” Soon the grand plot to destroy earth is unwittingly put into motion by David. I mean really, if we just stayed home we wouldn’t be reminding these life forms they need to destroy us. Certainly they have better things to do with their superior intelligence.

But alas, the sequence of events is impossible to stop. Prometheus’ Captain Janek (Idris Elba) launches a kamikaze mission on the alien craft to save all mankind. Alls well that ends well, right? Well, not exactly. Dr. Shaw is the lone survivor, along with a now decapitated but still operational David. He tells her there are other ships and he believes he can control one. She has lost everything she has loved and gone to hell and back. You’d think she would want to go back to earth. Here is where Prometheus changes the game. It’s not about going back home, it’s about going forward to confront potential “makers” and discover the secrets of the future that has cast the fate of the past.

Technical aspects are top shelf from cinematography to sound design. Mr. Scott’s standards are very high and he keeps them that way with this stellar production. Highly recommended for science fiction fans.

Don’t bother with the official Prometheus web site. It’s dripping with ad banners. It does however have lots of images. Instead go here. It’s the official web site of Weyland Industries. Clever and creative.