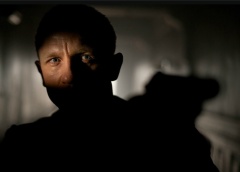 As someone who has seen probably 90% of the Bond films in the theater, I’ve had a front row seat at the evolution of the character and series. I do not engage in the “Who’s the best Bond” discussions or even which is the “Best Bond film.” This franchise has been running almost continuously for 41 years. Cultures, generations passing and the ever evolving world of filmmaking make comparisons pointless.

For quite some time now I’ve been focused on each film as primarily “stand alone.” There is no way one can’t allow their mind to drift back to other installments, but when that occurs I try to confine my thoughts to either themes that continue to present themselves or aspects that signal change.

Skyfall, directed by Sam Mendes, checks most of the Bond boxes for a devoted audience. Action, women, explosions, smug humor and a wonderfully evil villain. The film provides the credits for three writers, Neal Purvis, Robert Wade and John Logan. When I see more than two writers I try and pick out which writer wrote which scenes or dialogue. I must admit they stumped me. I couldn’t do it reliably. So let’s just say each one got 47 minutes worth of screen time, leading to another unusually long running time of 2 hours 23 minutes. More on long movies and why I like them can be found on my Podcast stream here.

Picture begins with a supercharged chase scene. First in cars, then on motorcycles atop a market and concluding on the roof of a moving train. Yes there are tunnels involved. Bond is trying to recover a hard drive that contains the identities of friendly operatives operating undercover against terrorists. Another reason we should not use excel.

The hard drive was delivered to Silva, played by Javier Bardem. It’s easy to spot Bardem as a bad guy because he always has a weird, psychopathic hair style. Yes I’m referring to his portrayal of Anton Chigurh in No Country for Old Men. This time his hair is long, straight, slicked-back and blonde. He is a former MI6 agent that was left to fend for himself in the field and harbors quite a grudge. He’s brilliant in a scary way and it turns out he is a meticulous planner. 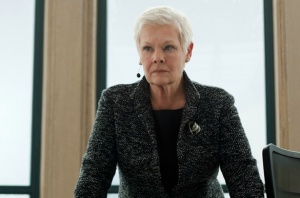 This installment examines an aging Bond. Physically he is not what he used to be which impacts his performance as well as mental state. He suddenly finds himself in a younger man’s game and the opening scene gives him a solid out, which he doesn’t take. So we have our mental model of Bond, never aging, always winning and the on-screen Bond who is been rung out after years of stress and near misses. Craig handles the transition wonderfully with wit, experience, and the call of duty as the MI6 headquarters is bombed.

M (Judi Dench) is also on the verge of the third stage of life. An in the moment call to an agent with a rifle raises questions about her fitness for duty. She has lost a step or two in the mind of Gareth Mallory (Ralph Fiennes). He hands M her walking papers but she refuses. Bond rakes her over the coals for not trusting him. Still she moves on.

The film’s climax takes place at Bond’s boyhood home in the middle of nowhere and with Albert Finney no less, as Kincade the groundskeeper, still in residence. Bond has baited the hook with M to finish the mission. In the meantime Silva assembles a small army and swarms the mini-castle with maximum firepower. These final scenes attempt to bring closure to too many issues to track. This is the one major flaw but it is forgiven because we have affection for the characters.

The technical aspects of the film are outstanding. Sound design and camera are executed in stellar fashion and the atmosphere created by the filmmakers is impressive and immersive. Thomas Newman provides a professional but entirely expected soundtrack. I will say he provides more variety than most. He had to fill those 143 minutes somehow and was up to it. Adele was tasked with the signature song and nailed it.

The Skyfall official web site is standard fare. Recommended for the film’s action, nostalgia value and to spur thought about what might be next.