The Academy of Motion Picture Arts and Sciences will hold it’s 90th awards ceremony this Sunday. Controversy within the industry continues. Most organizations are slow to change and this one is no different. Changes were made to the voting members to include more minorities and women. I’m hopeful that as a result, there will be equal access to the amazing talent that exists without bias. Here are my picks from this year’s nominations.

My Best Picture Pick:  Get Out

Get Out  This has been one of the most talked about films of the year. Jordan Peele borrows from a number of film genres but assembles them in his own unique way and gives us an experience that is truly groundbreaking. We get an entirely new take on race relations  in America that pierces all veils of shrouded truth on the subject. Excellent performances all around. I can’t wait to see what Jordan Peele does at the helm of The Twilight Zone reboot.

Call Me By Your Name  A 17 year old young man has his life altered forever during a summer spent in Italy. He meets a doctoral student who is working as an intern for his father. They are attracted to each other and Italy takes care of the rest. Outstanding performances are supported by the delicate and effective choices made by director Luca Guadagnino.

Darkest Hour  We never seem to tire of productions about British royalty. The Crown, Victoria; it never ends. All you need to know about Darkest Hour is two words: Gary Oldman. Beautifully photographed, witty and amazing attention to detail right down to the Churchill War Rooms. This picture is loud, large and filled with smoke. But the Brits are likely a bit overexposed for the Academy to choose it as best film. My full review here.

Dunkirk  More British, Churchill, stiff upper lip. The only best picture nomination not to have any actors on the ballot. It’s Christopher Nolan all the way as he painstakingly revisits this pivotal moment that could have tipped the balance towards Hitler if private seamen hadn’t rescued 400,000 trapped troops backed up against the sea on the Dunkirk beach. No detail has been overlooked in the recreation that makes this moment of humanity the main actors in this monumental film.

Lady Bird  The product of a young writer/director (Greta Gerwig) telling close-up and personal story. A Mother / Daughter relationship growing up is tough picture that struck a nerve with audiences. This film snuck up on me and has an outside chance of being chosen. My full review here.

Phantom Thread  Brilliant psychological study of a brother and sister team that rule the London fashion scene in the 1950’s. Paul Thomas Anderson creates yet another quirky world surrounded by a frame story that leads to a very surprising ending. No doubt the Academy will be tempted to vote for this pure cinema starring, for the last time, Daniel Day-Lewis. He has announced his retirement from acting. My full review here.

The Post  Spielberg, Hanks and Streep. The triple threat combine for a spellbinding look at the release of the documents that probably ended the Vietnam War. High production values all around and Spielberg’s signature filmmaking style is on widescreen display. Very timely reminder of what happens when Presidents and his administration become drunk with power.

The Shape of Water  There is haunting beauty in almost every frame of Guillermo del Toro’s spectacular story. He stacks the deck with reams of social content. A mute woman who has no known past is abused by overbearing men in the workplace. A gay commercial artist neighbor who was ousted from his job for drinking too much and lives with cats. The military industrial complex. Russian spies. Set in the Cold War 1960’s. Oh yes there’s that amphibian man. Ultimately it’s a love story.

Three Billboards Outside Ebbing, Missouri  Small midwest town sheriff can’t solve a brutal murder of a woman’s daughter. The mother is not satisfied with law enforcement’s efforts and goes into the advertising business by co-opting three billboards on the road into town.

Gary Oldman is beyond splendid in Darkest Hour, his portrayal of Churchill. His physical largeness was perfectly sculptured by a prosthetic body suit and superb facial make-up by Kazuhiro Tsuji. How an actor today could take on such a large figure that so many have tried in the past is a sign of courage. Inhabited is the word that comes to mind when I think about how Mr. Oldman plays the character. I have always admired his skills which have been carefully honed over years and the 92 characters he has played. I did catch a glimpse of Mr. Oldman here and there, but for the most part I assumed I was there in the room with the real Winston. 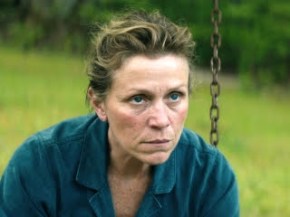 Frances McDormand never disappoints. Sturdy and funny, delivered in a fervent voice emanating from her face of endless character. In Three Billboards Outside Ebbing, Missouri she calls in some favors from characters she has played in the past and merges them anew, as a tortured mother wandering in a living nightmare. She is tough as nails, but on occasion she lets us inside that tight drum revealing a much softer side. She is beyond determined to goad the local police to revisit the murder of her daughter. Ms. McDormand is a force of acting nature.

I will admit that on my first viewing I wasn’t that  impressed by Sam Rockwell’s performance. I couldn’t put my finger on why. After a second screening it began to sink in. So much pain coursing through this character, constantly fueled by what he sees as injustice all around him. Race plays a big part as does loyalty to the Sheriff, and drowning all of this at the bottom of a glass. I realized he was modeling the southern cops we saw from the 1967 masterpiece, “In the Heat of the Night.” A fixed, narrow view that is one day turned completely upside down. Mr. Rockwell gives a character that at first can’t handle that inversion, but then rights himself, remembering the oath he swore as a law officer.

It’s hard to believe that’s really Allison Janney behind those glasses and oxygen tube. The story of I, Tonya wasn’t that interesting to me and I almost didn’t buy the ticket. That would have been my loss. Ms. Janney plays Tonya’s mother, LaVona, with a hateful glee I don’t think I’ve ever seen. Her role as mother is just about all we need to know in explaining what happened. I think it’s safe to say she never received one of those Best Mom Ever mugs. What struck me about her performance was how Ms. Janney was able to keep up a continuous, matter-of-fact approach to cruelty. She delivers a dozen or more lines like this one. “I made you a champion, knowing you’d hate me for it. That’s the sacrifice a mother makes!”

Alexandre Desplat is simply in a class by himself. He has composed over 170 scores, of which I have many favorites. His work for The Shape of Water grounds a fantasy from some other world, and compels us to try and understand. When he first saw the film, Mr. Desplat wrote in his notes that it seemed to be like a musical for which the music was yet to be written. He fixed that. Favorite track, Decency.

Original Screenplay:  Jordan Peele – Get Out

Adapted Screenplay:  James Ivory – Call Me by Your Name