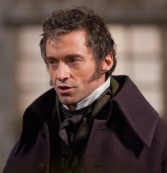 Les Misérables has been told countless times since Victor Hugo gave us his enormous novel. I uncovered over 50 small and large screen versions with only modest effort. Even Orson Welles tackled it on radio in 1937. Les Misérables is probably best known in contemporary times as a musical that began onstage in Paris in 1978. Within two years it opened in London and then became a fixture of the American musical where it still plays over two decades later. I saw it in 1987 in New York.

It was written as a novel, not a musical. So how did it transform into a musical? The soaring score of Claude-Michel Schönberg and powerful lyrics by Herbert Kretzmer — with contributions by James Fenton — sealed the fate of Les Misérables as a musical possibly forever. And so Tom Hooper the Director of The King’s Speech has taken up the challenge; again as a musical.

I will not recount the details of the story involving Jean Valjean (Hugh Jackman) and the diligent Inspector Javert (Russell Crowe) set during the French Revolution. All I’ll say is take my advice and never steal from a French bakery.

For me the most interesting aspects of this year’s Les Misérables is how the filmmakers and cast went about making it and how the studios marketed it. The script contains hardly twenty lines of spoken dialogue. The rest is all to be sung, no matter what character opens their mouth. This introduced new challenges for the actors as well as the film crew. Mr. Hooper wanted to combine singing with acting and so had the actors sing their parts live as they were being filmed. They wore invisible earbuds during their performance, listening to a pianist playing their musical pieces. Usually musicals are recorded ahead of time then the actors are filmed on set, lip-synching to their previous recording. The process used here is much more powerful and personal. It’s particularly effective during dialogue exchanges or when three actors sing their own parts individually and are cut into a weave of narrative by the editors. The sword fight, actually a sword and a long stick, between Javert and Valjean in the hospital after Fantine’s death is amazing. Two Australian stars singing snark talk as Frenchmen in Paris while doing bitter battle.

All actors turn in smashing performances with the most tears being shed during Fantine’s (Anne Hathaway) solo I Dreamed a Dream. Not a dry eye in the house as they say. Hugh Jackman puts his musical talents on display tackling the most difficult part as Valjean, while Russell Crowe, who played in the stage version of The Rocky Horror Picture Show in Australia is the determined Javert, who has a very specific way of looking at the world. Evil is one thing and good is another and they are fixed that way forever. Oh, a couple more observations about Javert. He has the best costumes and has a thing for walking on the edge of buildings many stories above the streets of Paris.

The camera takes wide sweeping runs at the massive sets, but when it comes to the songs, the camera moves right in on top of the actor’s faces. Extreme close-up. I believe they were so wrapped up in how they were filming, the overwhelming material and terrific interpretation by the stars, that they just couldn’t help themselves. Be prepared to see everyone’s face thirty feet tall most of the time. Despite the 2 hour and 38 minute running time I frequently felt the pacing was a bit jagged. When I wanted the images to slow down so I could take them in, they were cut off. When I was ready to move along to the next frame, the camera lingered.

The studios knew they had a challenge getting American audiences out to see their epic. The musical genre is always a risk for studios when it comes to box office take. The number one grossing musical since 1974 earned only $188 Million and was released in 1978 (Grease). Even Chicago is well behind that in second place. At the writing of this blog Les Misérables places eleventh with $66.7 Million. It should get a Golden Globe and Oscar bump in a few weeks.

The studios began their marketing in May with a teaser trailer which was upgraded to an extended version in September. They focused on the star talent and on the way in which the film would be made using live singing. They of course leveraged Social Media with Facebook, You Tube and Twitter, and placed one to two minute clips on cable operators networks like Comcast/Xfinity on demand for free.

Fans of the musical will likely flock to the cinema to see this and be very satisfied. Probably moved. Not everyone lives a few miles from quality live musical theater and can’t get to or can’t afford that experience. This film makes this amazing story accessible to millions more people.

Will the future ever arrive? … Should we continue to look upwards? Is the light we can see in the sky one of those which will presently be extinguished? The ideal is terrifying to behold, lost as it is in the depths, small isolated, a pin-point, brilliant but threatened on all sides by the dark forces that surround it; nevertheless, no more in danger than a star in the jaws of the clouds. — Victor Hugo

Front and back of Original Playbill, Broadway Theatre, 1987 (Steve A Furman Archives)

Colm Wilkinson who made his mark as the original Jean Valjean in London and New York (He was the Valjean I saw) returns to this picture to play the empathetic Bishop who gives Jackman’s Valjean a second chance.

The official movie web site is more interesting than most. Cast, crew, story, gallery of course. And they don’t launch music when you hit the site. Thank you. If you want details on the background of how the film came together read the Production Notes. There are also links to the free Companion Movie Book for iPad, similar to what was done with Lincoln. I don’t have the numbers on these companion book downloads, but I believe publishing them and making them free for iPads and tablets is a much better way to promote a film. Web sites of these pictures are so uninspired these days. Of course they link to the soundtrack. It’s billed as “highlights” because the entire film is the soundtrack. Some of my favorites were on their in their complete form, but others were truncated. A bit disappointed at that. They have some cool wallpapers and icons formatted for desktop and iPad.